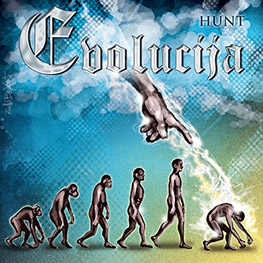 Originally, the name of the band was Revolucija (Revolution), but after finding out that there is at least one other band with that name (but probably like billion other bands haha) we decided to just subtract a letter. Later on, we realized that this new name is something we can all relate to, because progress and evolvement is something each and everyone of us should strive to. Also, because many people today unfortunately seem to evolve in opposite direction, we would like to lead by example and progress with every album, every show and so on.

All the members in the band had different influences throughout their musical journey and development, so ranges of music from which we get our inspiration is quite diverse, from Serbian Orthodox spiritual music, to some pretty extreme metal. In general, we are trying to stay as close to our vision as possible, and that is to make kind of melodic, catchy, in-your-face songs, but to still keep them heavy. As for the topics, those are usually some things everyone has to go through in life, like love, journey to finding your true self in spite of things that try to keep us off our path.

To us, the vocal lines are the most important part and the first step in the process. Once we get those, it’s time for the lyrics. After that, we do things in the usual manner. Of course, we were fortunate to meet the right people who helped us make it sound just the way we wanted. As for the themes, those are our regular topics, relations between people, both in a romantic and non-romantic ways. Another would probably be timing of some events in our life, things happening when we don’t think they should happen and vice versa.

Our plans are fairly simple, we want to push the band as far and as hard as possible, making songs that people can relate to, being on the road, making new friends, that kind of stuff.